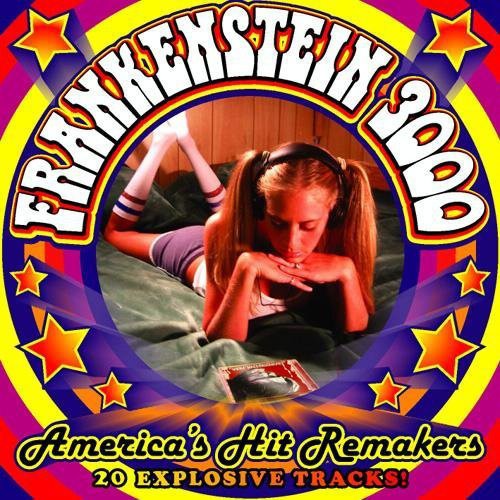 'America's Hit Remakers', Frankenstein 3000's tribute to the bands and songs that influenced them throughout their lives, is being released this summer on Main Man Records. The album was recorded over the course of a year, originally intended to compile the various covers F3K had contributed to tribute CDs in 2004. The project soon took on a life of it's own and the band was back in the studio throughout the winter of 2005. In addition to the previously released F3K versions of the Cheap Trick song 'Lookout' and Sweet's 'Blockbuster' the CD also features The New York Dolls' 'Babylon', recorded with Dolls' frontman extraordinaire David Johansen. Inspired by the collaboration, Frankenstein 3000 took a chance and invited such punk luminaries as The Runaways' vocalist Cherie Currie (dueting with F3K's Keith Roth on the Runaways' 'American Nights'), the Dead Boys' Cheetah Chrome (singing on the Ramones' 'Bop 'Til You Drop'), Generation X guitarist Derwood Andrews (on Joe Jackson's 'I'm The Man') and The Dictators' 'Handsome' Dick Manitoba (backing vocals on the Ramones' 'Rockaway Beach'). The centerpiece of the album comes in the form of the T Rex classic '20th Century Boy', with Leif Garret, Dolls guitarist Steve Conte and Mars Needs Women's Shawn Mars joining Frankenstein 3000 in what sounds like it must have been a wild night in the studio. Opening with The Dandy Warhols' 'Welcome To The Monkeyhouse', 'America's Hit Remakers' also includes songs originally recorded by The Beatles, Queen, Redd Kross, The Wildhearts, Velvet Underground, The Dictators and The Pretenders. ____ When Keith Roth envisioned fronting his own band after the rise and fall of his former band, Bad Biscuit, he saw it almost as giving life to that which had become dormant: 'As far as I was concerned, rock 'n' roll had been on life support since '79, and I wasn't ready to pull the plug just yet. There was still something in there.' This new band would be a combination of his best friends and the best musicians he could find. Keith, an accomplished bass player, saw this project as a new beginning; a new opportunity to create what he'd always dreamed of: the perfect rock 'n' roll machine in the tradition of his heroes like Kiss, David Bowie, The Stooges and The Ramones. For Frankenstein 3000, he took over guitar and vocal duties and sparked life into the creature with a dozen new songs and the ambition to achieve what his former band had come so close to, but failed to do: conquer the world. At first, Frankenstein 3000 was a revolving door project, with countless NY/NJ metro area musicians passing through, but it wasn't until the current incarnation was solidified that Keith truly felt like he'd finally realized his vision. The Jersey Shore music scene is close-knit; some would even call it incestuous. Keith took that into account when looking for the perfect line-up for his new band. 'I figured the best place to look for the best players was in the best bands. I wasn't interested in taking out ads and sitting through the grueling audition process. I knew what I wanted.' Clint Gascoyne (drums) had been playing in one local band or another for the past ten years, including underground heroes Happysad. He had a reputation as a reliable and hard-hitting drummer... just what Keith was looking for. 'I had known Keith for years, but it wasn't until he asked me to join F3K that I got to see where his true talents lie: being center stage. He is an amazing front man.' Dave Lister (guitar & vocals) was well known around the Shore area as a gifted guitar player. Dave, originally from New Jersey, had just returned from a few years in Florida when he got the call from Keith to join his new band. 'I knew Keith for years, too. I was thrilled when he asked me to be F3K's lead guitar player. This band kicks ass every night.' Eric Hoagland (bass & vocals) was a long-time member of The Discontent when Keith approached him about taking over bass duties in Frankenstein 3000. Eric didn't need to be asked twice; he was in. 'I'd been following F3K's progress and knew it was the perfect band for me. Good ol' straight-ahead rock 'n' roll music, played loud and fast.' With all of the pieces securely in place, Frankenstein 3000 started rehearsals and was ready for their debut in no time. Since then the band has performed regularly with more than 50 shows in 2003 alone. Sharing the stage with such luminaries as The Smithereens, Skid Row and Monster Magnet, the band can easily hold their own, winning over any crowd they've played for. Frankenstein 3000 has contributed to countless tribute CDs and they finally decided to compile them onto one easy to play CD. Along the way they reached out to a few friends and the results are stupendous. Designed like a K-Tel collection from the 70s, 'America's Hit Remakers' is a non-stop covers party.