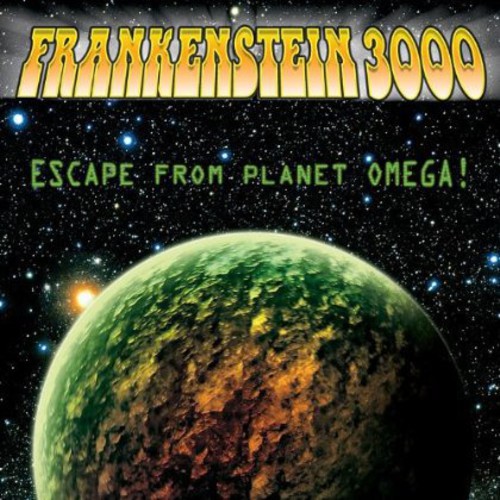 Following hot on the heels of their early 2012 release, ALLERTON AVENUE, Frankenstein 3000 returns with ESCAPE FROM PLANET OMEGA!, a collection of recordings from various sessions and line ups... it's what they intended their debut to be. The New York City area band is finally happy with the OMEGA project, more than 7 years in the making. Guitarist/vocalist Keith Roth says "When [current guitarist] Tommy Tafaro joined Frankenstein 3000 in 2007 we rehearsed for 2 months and recorded WELCOME TO PLANET OMEGA in 48 hours. The plan was to capture the excitement we were feeling, but the result was less than we had anticipated." "We had recorded the album twice with two different guitarists before Tommy came on board" says drummer Clint Gascoyne, "but obviously we wanted him on the official release of WELCOME TO PLANET OMEGA. Maybe we rushed it. It wasn't until recently that Keith and I talked about putting together the best recordings from all of those sessions as the penultimate OMEGA record." "We were never happy with the mixes on WELCOME TO PLANET OMEGA" says Keith. "The performances were definitely there... that's never been a problem with this band. Some takes were used that weren't meant for the final version and I always hoped we'd be able to revisit the project someday. Now seemed like the perfect time." After rummaging through old tapes Frankenstein 3000 found the superior version of each song intended for OMEGA, like "Goin' Away", "Fooled In The Rain", "Independence", "Thunder" and "One Time". They also unearthed some cover songs recorded during the time, including "Rock Show" (originally by Wings), "Sugarbuzz" (originally by Marvelous 3), "I Love Livin' In The City" (originally by Fear), "Judgement Day" (originally recorded for a Love And Rockets tribute) and "Long Way To Go" (originally recorded for an Enuff Z'Nuff tribute). The last song on the compilation, "Let Me Down Hard" is the title track from an upcoming film. ESCAPE FROM PLANET OMEGA closes a chapter in the Frankenstein 3000 story... a chapter the band has been looking to finish for a long time. In the past year Frankenstein 3000 has shared the stage with such rock 'n' roll luminaries as David Johansen (New York Dolls), Glen Matlock (Sex Pistols), Cheetah Chrome (Dead Boys), Urge Overkill and D Generation to name but a few. Never ones to waste any time, the band will continue to perform into the new year and have already begun writing sessions for their next release.