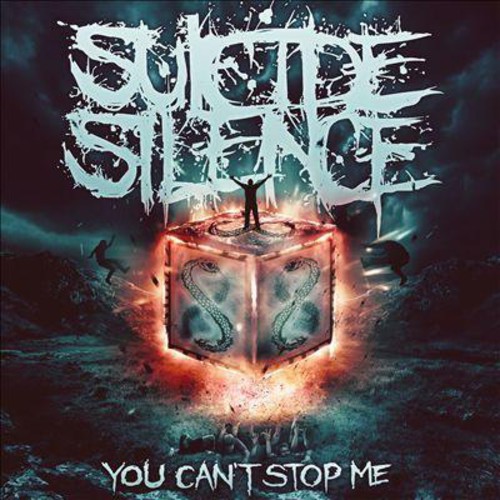 California deathcore masters SUICIDE SILENCE will release "You Can't Stop Me", their first album to feature new vocalist Hernan "Eddie" Hermida (ex-ALL SHALL PERISH) and their first since the tragic loss of singer Mitch Lucker, on July 11 in Europe (except in the U.K., where it will arrive on July 14) and July 15 in North America via Nuclear Blast Entertainment. "You Can't Stop Me" was produced and mixed by Steve Evetts.

Many of the greatest works of art throughout history were fashioned from grief, anger and overwhelming despair descending on its creators in the aftermath of tragedy and SUICIDE SILENCE’s appropriately titled You Can’t Stop Me is no exception. Plenty of bands trumpet the idea of strength through adversity, but few have lived it like this one.

Like the once unthinkable creative and commercial reemergence of ALICE IN CHAINS or the classic, legendary and timeless touchstone that is AC/DC’s Back in Black, Suicide Silence’s fourth album features a new frontman on the heels of earthshaking tragedy. You Can’t Stop Me serves as a simultaneous introduction to vocalist Hernan “Eddie” Hermida, as well as a celebration of the brotherhood the band shared with Hermida’s fallen predecessor. The group chose the album’s title from a collection of lyrics left behind by the late Mitch Lucker, while their formidable revamped sound makes it clear that Suicide Silence’s resurrection is complete. Ever since Suicide Silence went public with their plans to continue as a band, they’ve put all of the emotions from the last two years into these songs. “Inherit the Crown” name checks The Black Crown, as Hermida demands the chance to honor his friend’s legacy and carve out a place of his own.

Mark Heylmun and Chris Garza (guitars), Dan Kenny (bass) and Alex Lopez (drums) sound more driven than ever, force-feeding their mashup of death metal, black metal, grind and time-signature bending dissonance into structured, focused and often groove-oriented missives of anger and perseverance. Just as the surviving members of JOY DIVISION were able to remake themselves as NEW ORDER, and as a post-plane crash LYNYRD SKYNYRD was reborn with Johnny Van Zant stepping in for his late brother, You Can’t Stop Me is equal parts mournful tribute and statement of renewed purpose.

Death metal legend George “Corpsegrinder” Fisher (CANNIBAL CORPSE) and Greg Puciato (THE DILLINGER ESCAPE PLAN, KILLER BE KILLED) make guest appearances, but make no mistake: Suicide Silence is as bonded, as cohesive, as ever. You Can’t Stop Me was produced and mixed by Steve Evetts (THE DILLINGER ESCAPE PLAN, GLASSJAW, SEPULTURA), the band’s longtime friend and collaborator. Evetts was set to begin working with Lucker on new material just days after the singer’s passing.

Most bands will declare their most recent album the “best” they’ve ever done. Suicide Silence have declared You Can’t Stop Me as their most impassioned, most committed, and most important release thus far. It’s a record they fought, bled, sweated and even cried to make happen. If a rising heavy metal band can overcome a tragedy this triumphantly, this definitively, this absolutely, then surely there’s hope for us all.