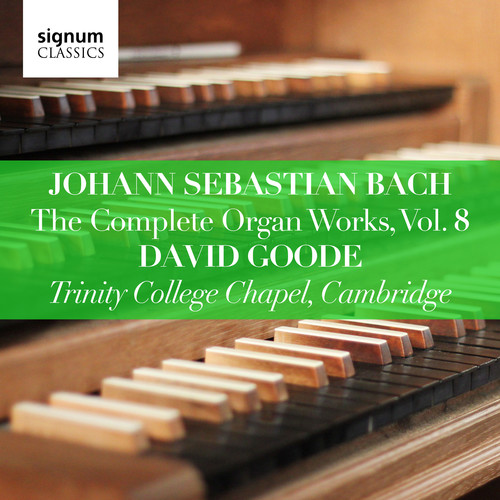 David Goode continues his new series of the complete organ works of Johann Sebastian Bach, played on the Metzler Sohne organ of Trinity College Chapel, Cambridge. This eighth volume includes the Concerto after Vivaldi Op. 3 No. 8, BWV 593 as well as the "Dorian" Toccata and Fugue, BWV 538. David Goode is Organist at Eton College, combining this post with a flourishing performing career. A music scholar at Eton, and then organ scholar at King's College, Cambridge, he studied organ with David Sanger and in Amsterdam with Jacques van Oortmerssen. From 1996-2001 he was Sub-Organist at Christ Church, Oxford; following prizes at the 1997 St. Alban's Competition, and the 1998 Calgary Competition, he concentrated on a freelance career between 2001 and 2003. In 2003 he moved for 2 years to Los Angeles as Organist-In Residence at First Congregational Church, home to the world's largest church organ. In 2002, he made his recital debut. The organ of Trinity College Chapel was built by the Swiss firm Metzler Sohne in 1976. The design, by Bernhardt Edskes, incorporated the surviving pipework of the two organs built for Trinity by "Father" Bernard Smith in 1694 and 1708.